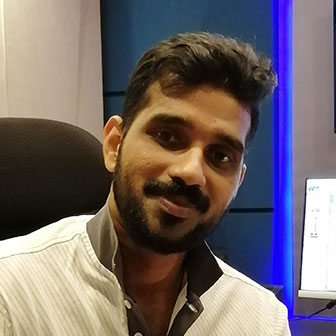 Vishnu is a music composer, arranger and programmer who has been active in the film and movie industry for over 10 years. His major works include feature films, corporate videos, short films and advertisements for various brands. Some of the noted works he has worked on are Malgudi Days (2016) and Nirangal Thodan Varoo among many others. Some of the renowned brands he has worked for include Mercedes Benz, Twin Birds, IFB, Mahalakshmi Silks, Classy Furniture etc. Apart from his work on 40 short films, Vishnu worked on the arrangement and programming of songs in Malayalam, Tamil and Kannada languages.